Ringing bells, a smartphone company which was unheard of till date, was suddenly in news this week for promoting the idea of a smartphone with a price tag of Rs 251. Now the fact that the phone is subsidised or does it really cost this less to make a smartphone so cheap is quite debatable.
A smartphone at Rs 251 was a jaw-dropping headline. Touted as the world’s cheapest smartphone, the price point naturally raised eyebrows – and hopes. Excitement was mixed with skepticism; through the day, there were more people asking questions than answering them. As our article went live before the launch, we are back with an update to tell you about the questions buzzing around and some possible answers.
The topic has been trending on social media all day and has also sounded the alarm to a potential scam. 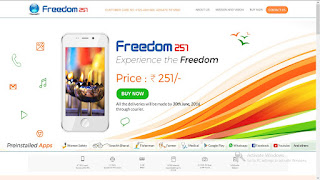 However, at present, screen replacement costs about Rs 2000. While the debate on the manufacturing costs will go on forever, we have to admit that a smartphone at a cost of Rs 251 is definitely a steal deal.
Here are few things which you should know about the Freedom 251.