Procedure oriented programming basically consists writing a lists of instructions  for the computer to follow and organizing these instructions into groups known as functions.
In a multi-function program, many important data items are placed as global, so that they may be accessed by all the functions.  Each functions may have its own data.

Fig. Relationship of data and functions in procedural programming

Some of the procedure oriented language are C, COBOL and PASCAL.

Procedure oriented languages is a conventional programming using high level language such as COBOL, FORTRAN AND C is commonly known as procedural language.

* A number of functions are written to accomplish these tasks.  The primary focus is on functions.

A typical program structure for procedural program is shown in figure. 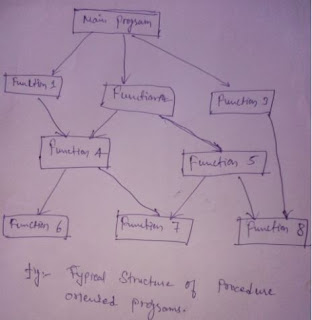 1.  Emphasis is on doing things ( Algorithms ).
2.  Large programs are divided into smaller programs known as functions.
3.  Most of the functions share global data.
4.  Data move openly round the system from function to function.
5.  Functions transforms data from one form to another.
6.  Employs top-down approach in program design.

1.  It doesn't model real world problems very well.  This is because the functions are action-oriented and do not really correspond to elements of the problem.
2.  Global data are more vulnerable to an inadvertent change by a function.  In a large program it is very difficult to identify what data used by which functions.