First Ever Round-The-World Solar Flight...Starting From Abu Dhabi, Solar Impulse 2 Will Chart 35,000-km Rout Without A Drope of Fuel. 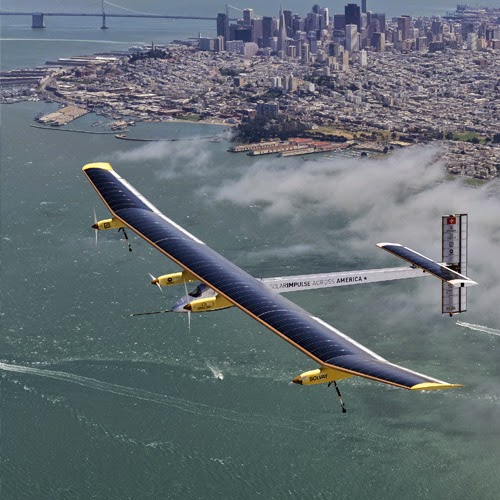 Solar Impulse 2 is all set to make a unique round-the-world journey, totally powered by solar energy.  Solar Impulse2, which weighs as much as a car at 2,300kg, will begin its trip in a few days, making stopovers at Ahmedabad and Varanasi in India, after taking off from Abu Dhabi.  The probable launch is on March 8, but will depend on weather conditions.  From Varanasi, it will fly to Mandalay in Myanmar and Chongqing in China before reaching the US.
Adventurer Bertrand Piccard, one of the first balloonists to circle the earth, and MIT graduate Andre Boschberg - the Swiss co-founders and pilots of Solar Impulse 2, will fly 35,000km day and night across the world, with stopovers at just 12 locations, without using a drop of fuel. "We want demonstrate that clean technology and renewable energy can achieve the impossible.  We want youth, leaders, organizations and policy-makers to understand that what Solar Impulse 2 can achieve in the air, everyone can accomplish on ground in their everyday lives.  Renewable energy can become an integral part of our lives," said Piccard. The $150m project took 12 years of feasibility studies, design and construction.  While the Solar Impulse 2 was put together in Payerne in Switzerland, its crew comprising 80 technicians and engineers are camping in Abu Dhabi since January.
Its goal is not to transport passengers.  The idea is to use modern technology to reduce the energy lost by use by old technologies. It is not the first solar airplane.  It is the first that is able to cross Oceans and Continents, remaining in air for several days & nights without landing.  Solar aviation history has achieved - flying without fuel for five consecutive days & nights with only one pilot in the unpressurized cockpit.
Till now, Solar Impulse has made a number of test flights including a 26-hour flight in July 2010 with nine hours of night flying, an inter-continent in Morocco and a cross-US flight from California to Arizona.