Economiser : An economiser is a device in which the waste heat of the flue gases is utilised for
heating the feed water. 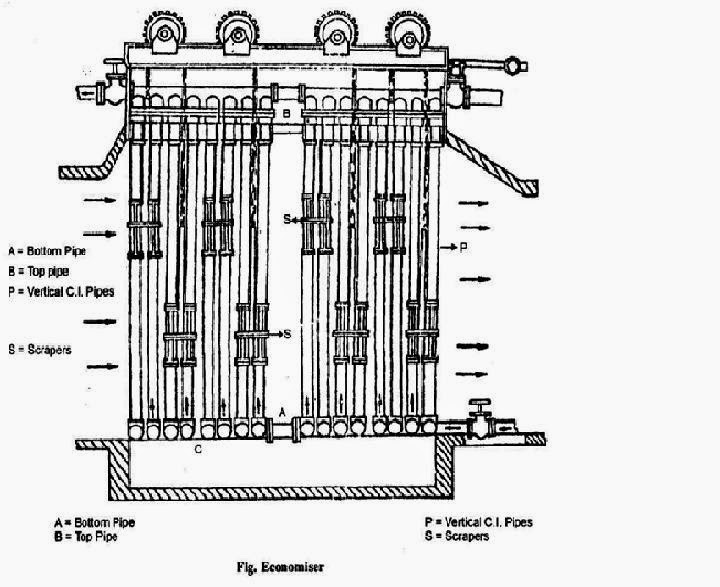 Injector : The function of an injector is to feed water into the boiler. It is commonly employed for
vertical and locomotive boilers and does not find its application in large capacity high pressure boilers. It
is also used where the space is not available for the installation of a feed pump. In an injector the water is delivered to the boiler by steam pressure; the kinetic energy of steam is used to increase the pressure and velocity of the feed water. 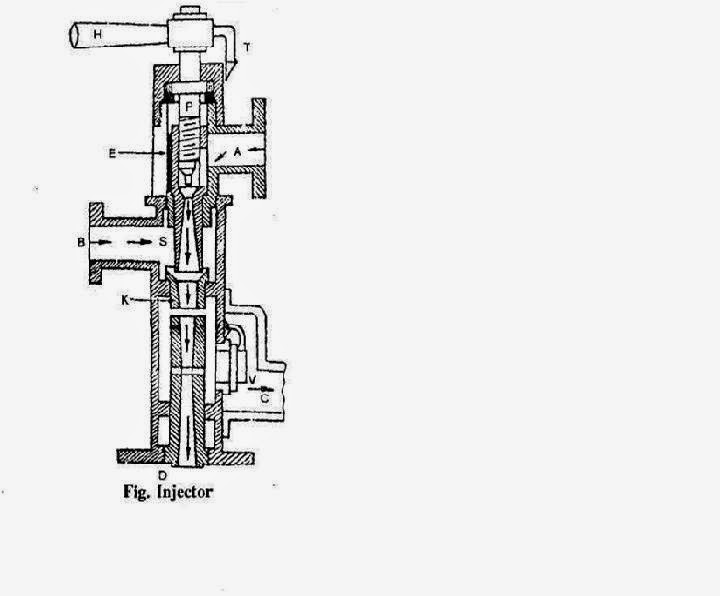 Superheater: The function of a superheater is to increase the temperature of the steam above its
saturation point. The superheater is very important accessory of a boiler and can be used both on fire-tube
and water-tube boilers. The small boilers are not commonly provided with a superheater.

Steam Separator: Thesteam available from a boiler may be either wet, dry; or superheated; but in
many cases there will be loss of heat from it during its passage through the steam pipe from the boiler to the engine tending to produce wetness. The use of wet steam in an engine or turbine is uneconomical besides involving some risk ; hence it is usual to endeavour to separate any water that may be present from the steam before the latter enters the engine. This is accomplished by the use of a steam separator. Thus, the tunction of a steam separator is to remove the entrained water particles from the steam conveyed to the steam engine or turbine. It is installed as close to the steam engine as possible on the main steam pipe from the boiler.

Air Preheater : The function of the air pre-heater is to increase the temperature of air before it
enters the furnace. It is generally placed after the economiser; so the flue gases pass through the
economiser and then to the air preheater. 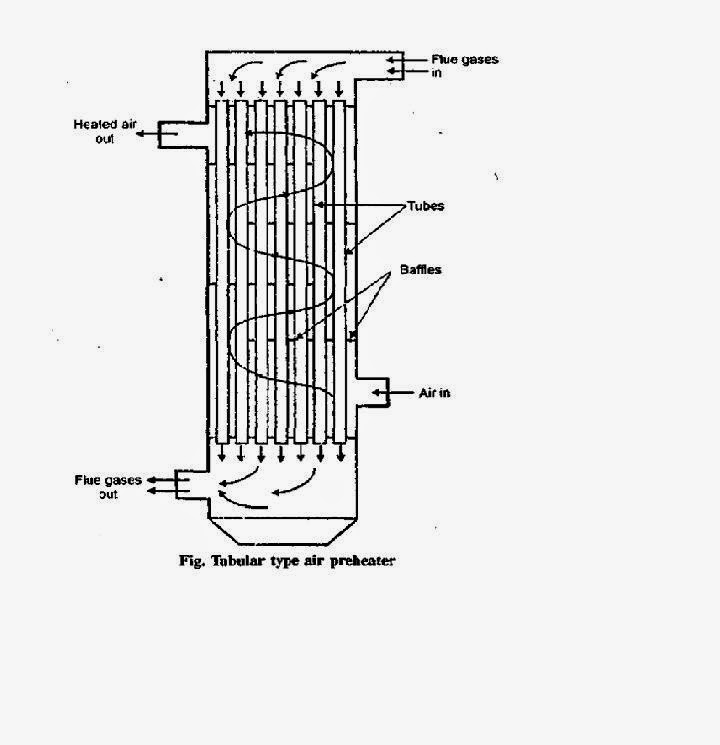 Q. 2 (a) Diffrentiate between jet condensers and surface condensers. 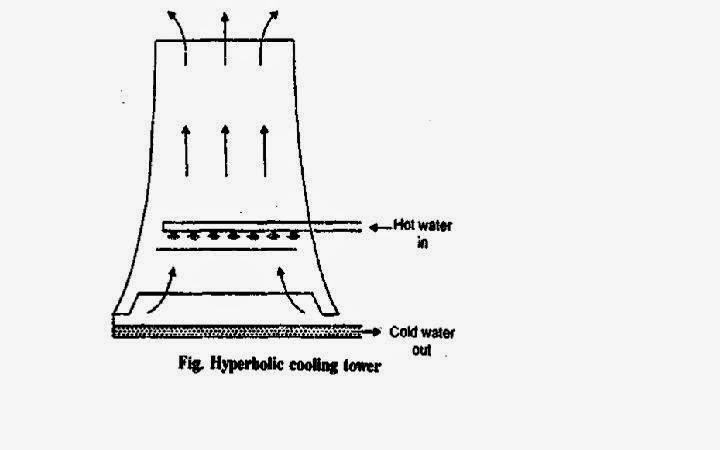 (ii) Mechanical Draught Cooling Towers : In these towers the draught of air for cooling the tower is
produced mechanically by means of propeller fans. These towers are usually built in cells or units, the
capacity depending upon the number of cells used. 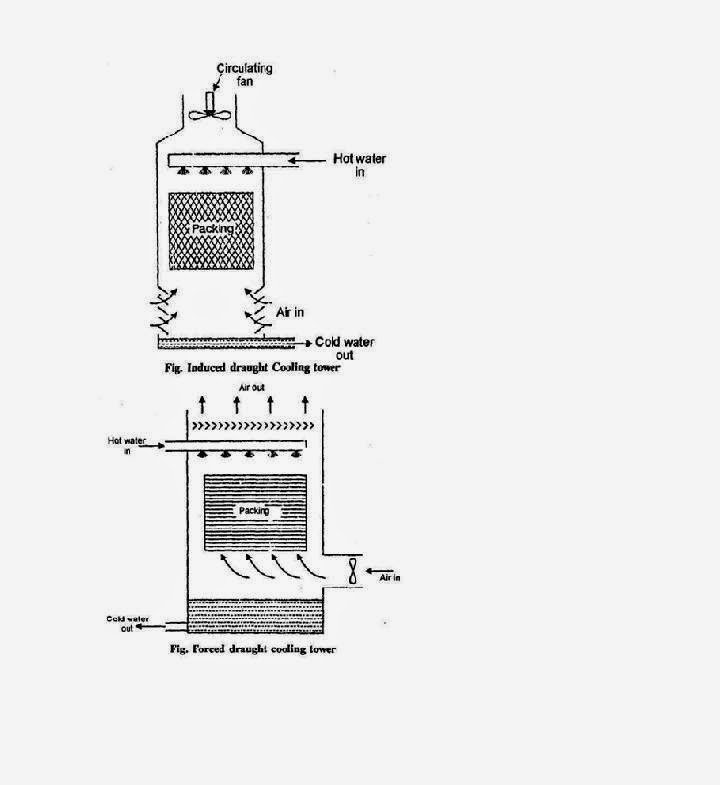 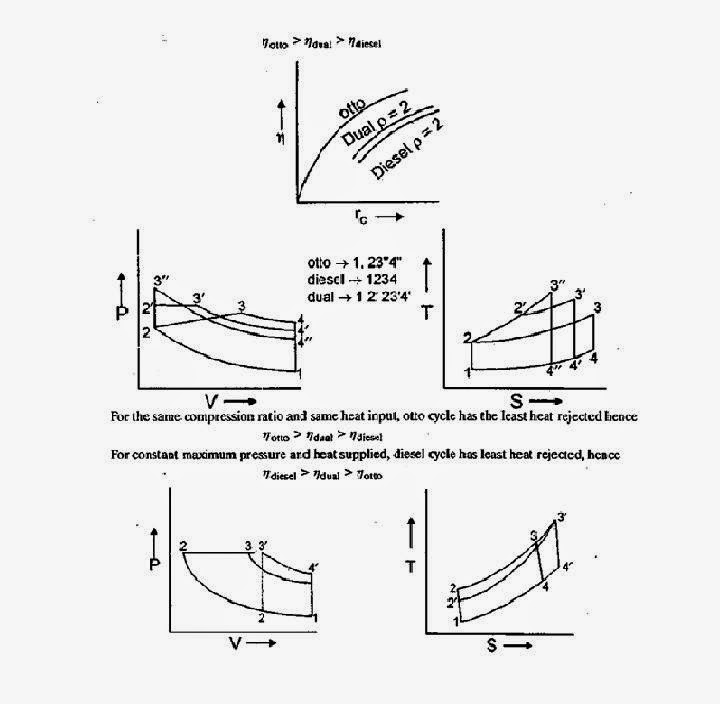 Q. 3. (b) Differentiate between two stroke and four stroke engines.

Q. 4. (a) It is desired to generator 1000 kW of power and survey reveals that 450 m of static head and a minimum flow of 03 m /sec is available. Comment whether the task can be accomplished by installing a Pelton wheel that turns 1000 revolutions per minute and has an efficiency of 80%. Further design the Pelton wheel by assuming suitable data for coefficient of velocity, speed ratio and velocity coefficient of the jet. 12 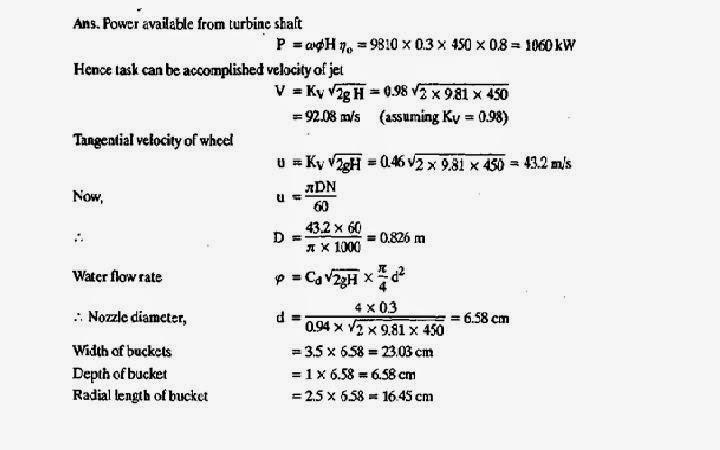 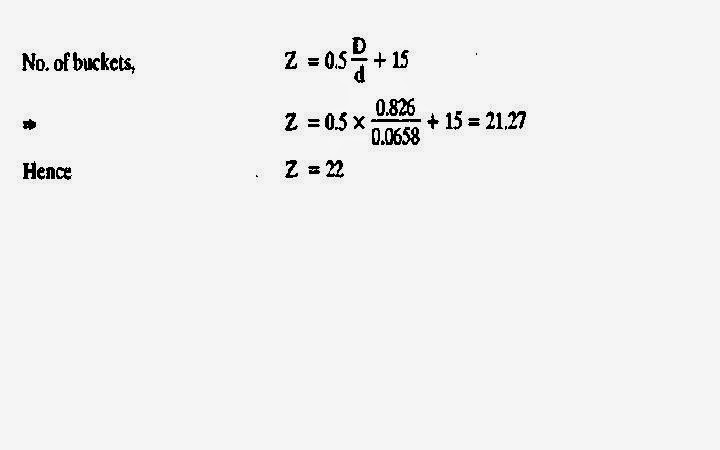 Q. 4. (b) Differentiate between Impulse and Reaction hydraulic turbines.
Ans.

Q. 5. (a) Derive V.R. for single start, double start and triple start worm and worm wheel and compare their results.
Ans.   Assume that worm rotates through one revolution about its axis. Then angle turned by it will be
2K. The lead of worm is the distance moved by pitch circle at the gear wheel. Thus, angle turned by it
during the same time will be I/R2 or 2I/d2. 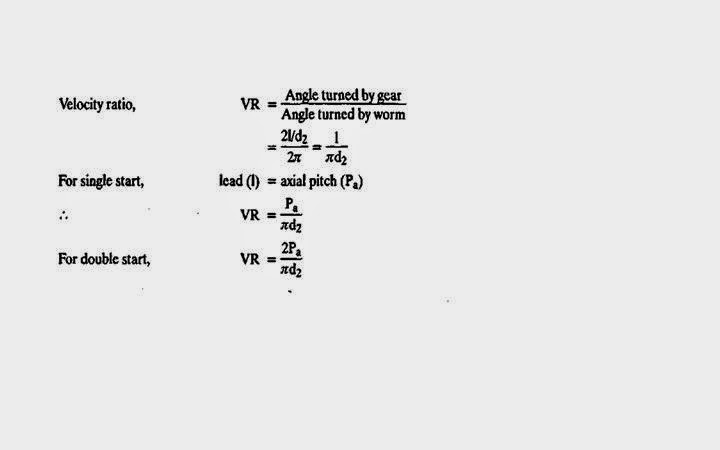 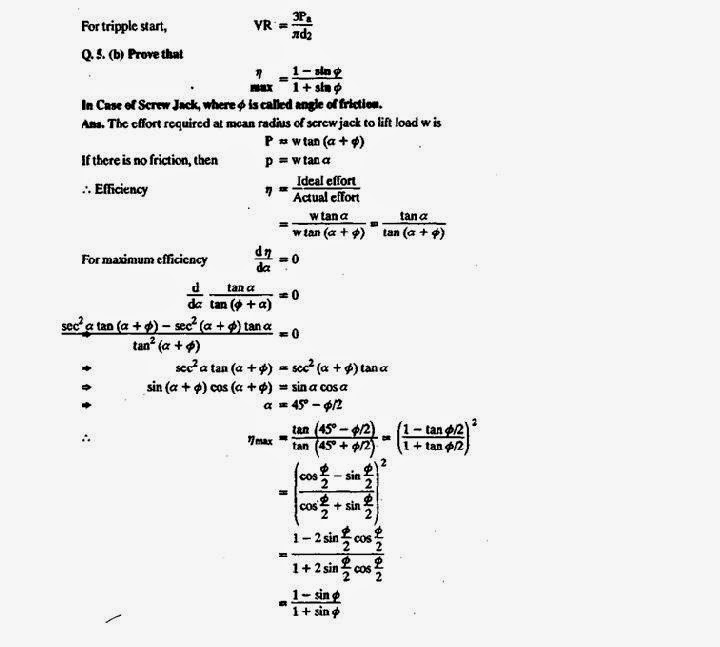 Q.6 (a) Prove that for crossed belt drive system the length of belt is given by 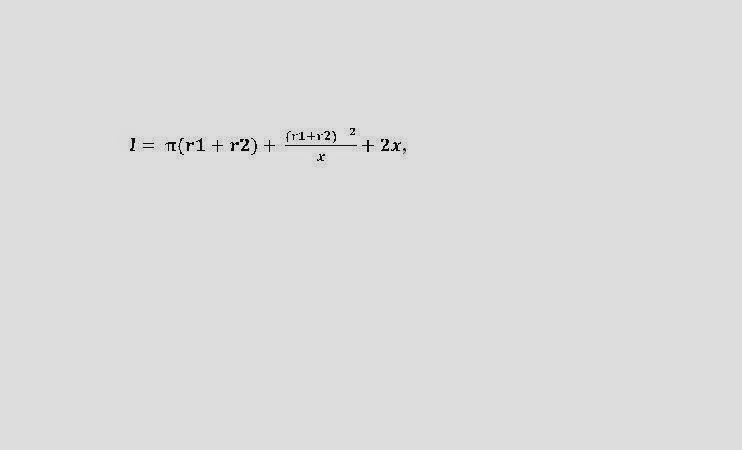 , r1,r2 are radii of drive and driven pulleys x is the distance between centers of two pulleys.
Ans. 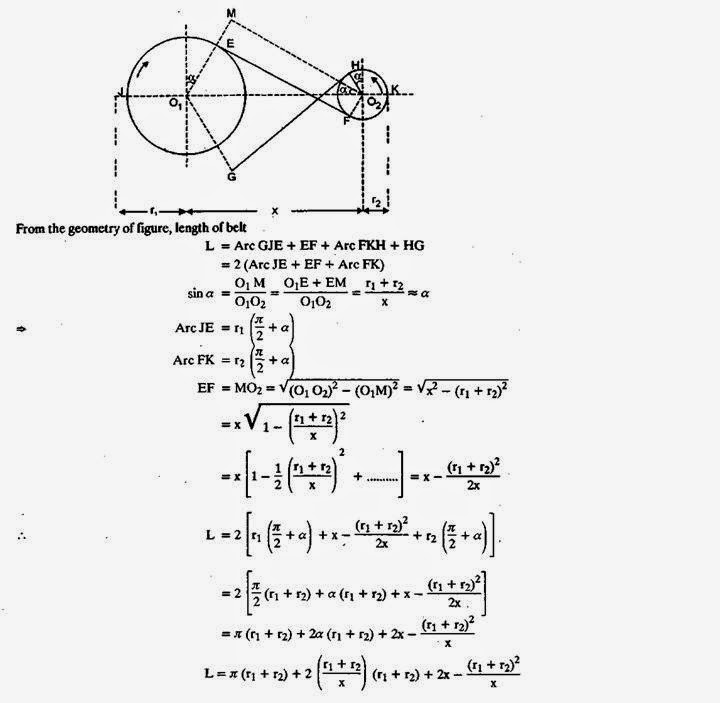 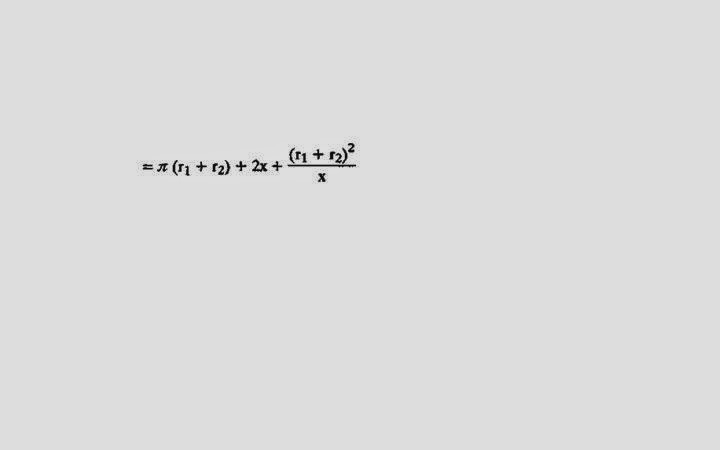 Q. 6. (b) What do you mean by clutch ? Discuss single plate clutch system with neat sketch.

Ans.  A clutch is a device used to transmit the rotary motion of one shaft to another when desired.
Disc Clutch (Single-Plate Clutch): A disc clutch consists of a clutch plate attached to a splined hub
which is free to slide axially on splines cut on the driven shaft. The clutch plate is made of steel and has a
ring of friction lining on each side. The engine shaft supports a rigidly fixed flywheel. A spring-loaded pressure plate presses the clutch plate firmly against the flywheel when the clutch is engaged. When disengaged, the springs press against a cover attached to the flywheel. Thus, both the flywheel and the pressure plate rotate with the input shaft. The movement of the clutch pedal is transferred to the pressure plate through a thrust bearing. 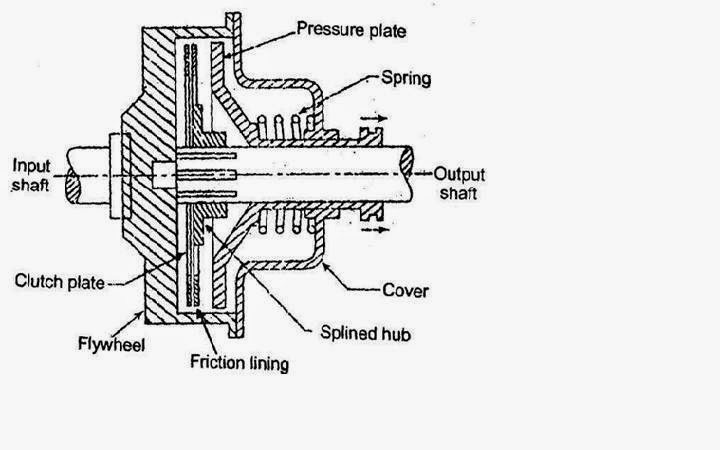 Q. 7. (a) Derive an expression for extension of a tapered bar.
Ans. Let diameter of bar 'd’ at distance x from AB 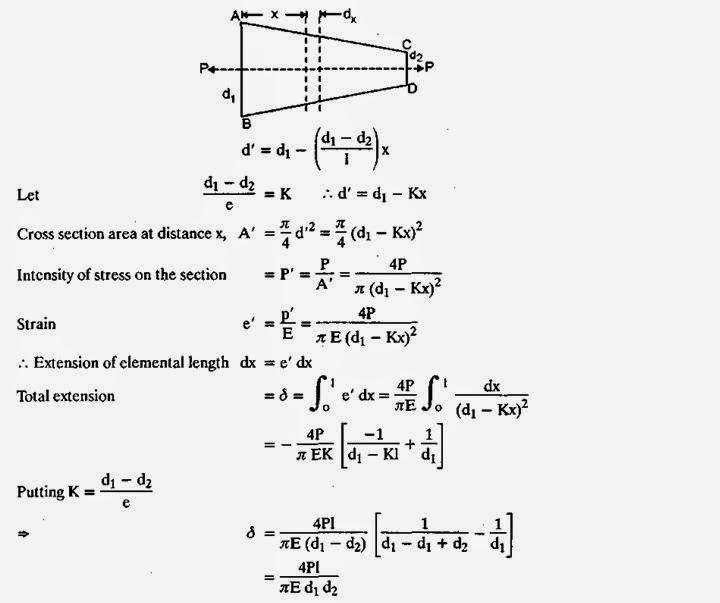 Q. 7. (b) A thin walled tube, when subjected to internal pressure and Torque; has the following set
of stresses produced at a point on its wall surface.
(i) 50 N/mm & 30 N/mm at right angles to each other, both tensile.
(ii) Complimentary shear stress of 40 N/mm determine the normal, tangential stresses on the
planes which are equally inclined to the direct stresses. How the results would be affected if due to end
thrust, 30 N/mm stress becomes compressive and other stresses remain unchanged.

Ans. The normal and tangential stresses on any plane 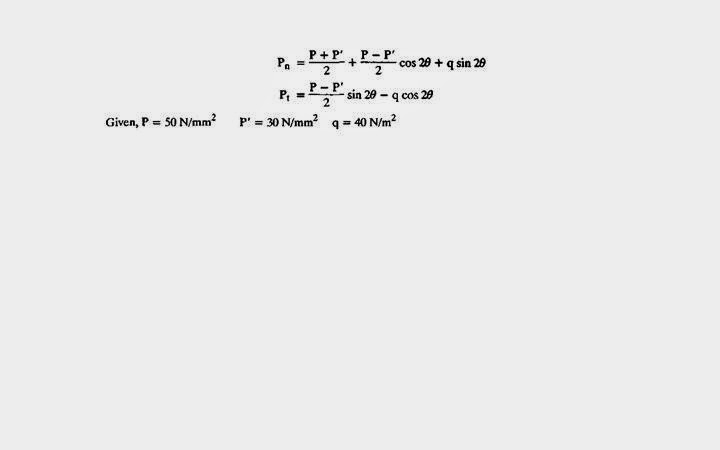 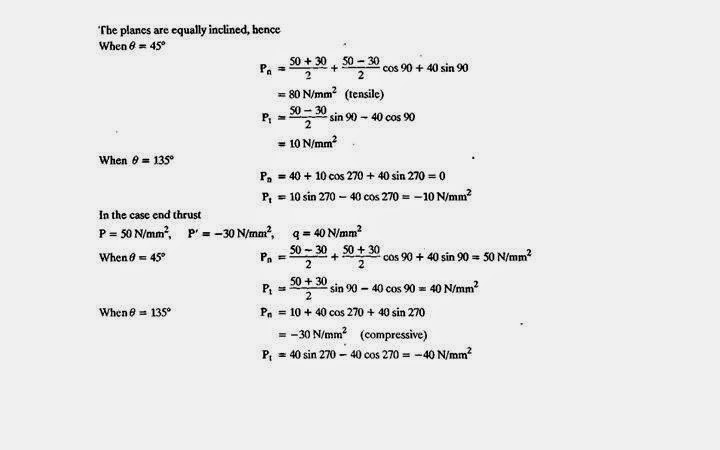 Q. 8. Determine the reactions and construct the shear force and bending moment diagram for the beam loaded as shown in the figure. Also find the points of contraflexure. 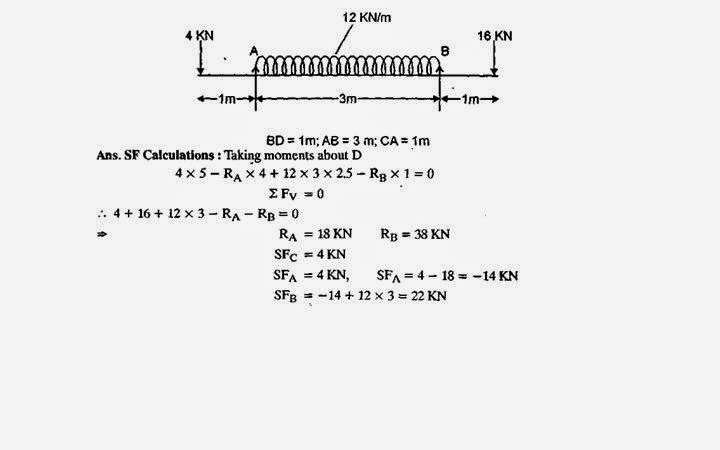 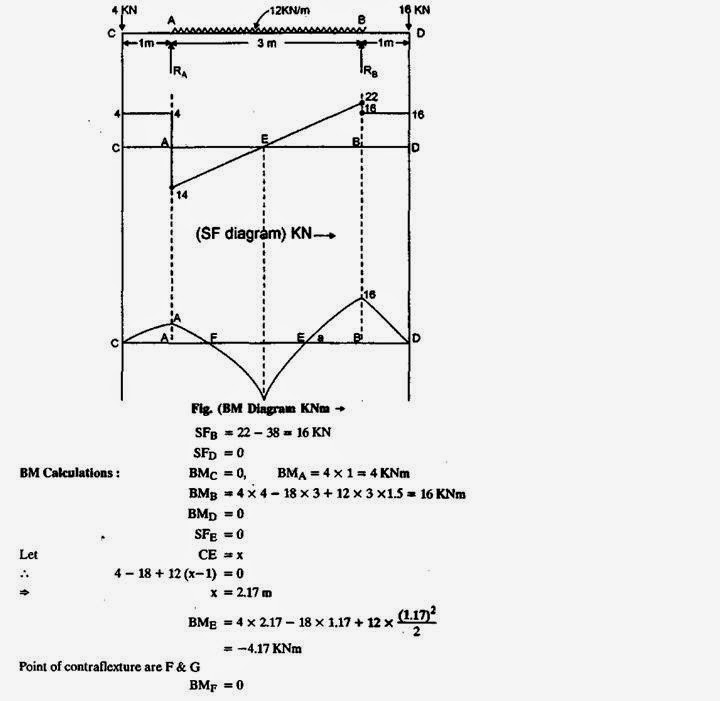